Your memories of the Star and Garter 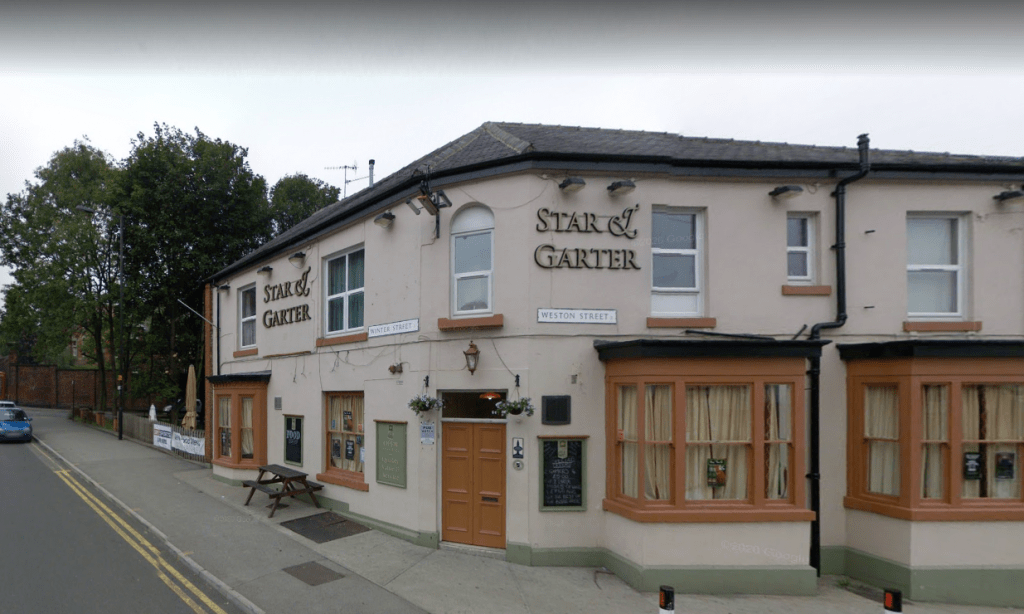 The Star and Garter pub stood on Winter Street for many years (the PubWiki website suggests it began in 1871), unusual in that its clientele was made up of both local residents and students, although in recent years there were fewer and fewer of either.

It moved from a thriving pub in the 90s and early 2000s to somewhere that was mostly empty and seemed to have new management every few years. Closing its doors for good in 2016, the Star and Garter has now been demolished and replaced by a 16-storey block of student flats.

Situated on the corner of Winter Street and Weston Street, the Star and Garter had staff accommodation upstairs and a beer garden. There was a pool table, karaoke nights and, in the old days, a juke box. The surrounding area in Netherthorpe was mostly rebuilt in the 60s, from back-to-back terraces to a combination of houses and flats. Across the main road is the university’s Arts Tower.

I asked friends about their memories of the Star and Garter.

If you have other memories of the place, let me know.

Michelle remembers “Drinking real ales with my then fiance” and Emily recalls “It was our local when we first got married, drank way to much proper guiness in there, sometimes even had a shamrock on the top”.

In the mid-1990s, the University of Sheffield’s LGBT+ Group (then called the LGB group) would descend on the Star and Garter on Tuesday nights, following group meetings, and on Fridays before the monthly Climax club night. That was when I got to know and love the place. We would watch Queer as Folk on the giant TV on the wall, play pool and win 30 seconds behind the bar on the pub quiz.

Here are my LGB friends’ memories of the pub:

Tom: The uni of Shef LGB committee socials used to convene there on Tuesday nights in my first year. When Queer as Folk was on, (so 1999?) they used to put it on the big screen for us. I think this pissed off some of the regulars.

Claire: I dunno how many of my memories are repeatable on here (that sounds worse than it is, can DM you to illustrate what I mean). I’ve got many memories of long conversations with people including:

It was an eclectic place.

Sunny: LGB group on Tuesday, pagan society on Sunday. My 20th birthday, Lucy and Alex ambushing me with a cake that they had lit in the toilets, before going to Lucy’s Filey St house for my party.

Abi: Loved that pub. Did it also have a quiz on the Tuesday nights we went in after LGB night? I used to go 95-98.

Jeni: definitely a quiz there every Tuesday night after LGB Soc. I used to read the quiz in exchange for a pint! I graduated in ‘98 so it was before then.

Jen: Some of the best memories of my University years there spent with brilliant people, drinking, watching Queer As Folk and Bad Girls, playing pool, quizzing, dancing…

Gayle: I so remember Bad Girls! Plus Queer As Folk on the big screen. The Jesses, Lucy – so many friendships and more!

Dharmamayi: So many memories! LGB stuff, Adam always being there, kissed my first girl there, many drunken days and nights of setting the world to rights, playing pool, smoking, laughing, deepening friendships. Do also remember Queer As Folk on the big screen. Can’t believe it no longer exists!!

Katie: LGB socials, QAF. The time I walked in with a shaved head after ‘doing a Britney’ before even Britney did it. So many conversations, so many drunken nights, so many friendships (and more) made in there. Mostly a haze now – I blame the beer.

Tom: I have a vague memory of Jen and others sat in there, planning to go to Climax dressed as the various ages of Cher a good 17 years before RuPauls Drag race did the exact same bit.

Gayle: Was Tuesday Gay night? We used to meet up and the lesbians would always we gathered around the pool table and the gay guys would be at the tables along the window. The same people would sit in pretty much the same seats. Some older Lesbians would sit at the actual bar. I loved it! I met so so many great people in there!

Lucy: I should add that my first date with my wife was in the Star and Garter on a Sunday afternoon. It was a blind date. The date lasted until Tuesday morning. We are still together 24 years later.

Adam, who is mentioned above, drank, worked and even lived in the Star and Garter for a while. Stay tuned for an interview with him about his memories of the place.