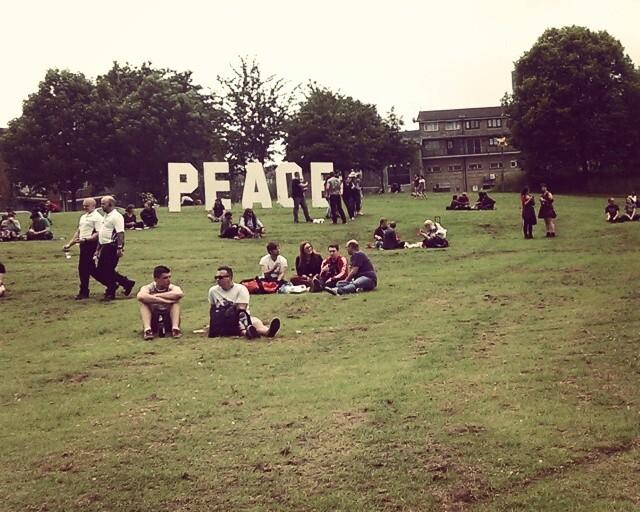 Peace in the Park is a Sheffield event that moved from Devonshire Green (in 2003) to the Ponderosa, where it first took place in 2008 after a few years in Endcliffe Park and Sheffield General Cemetery. It began as part of a wider culture of pro-peace campaigning in the city and has grown to be a much-loved event in the (almost) annual Sheffield calendar.

These days, the festival is unrecognisable compared to its early days. It is bigger, and better organised, but this does not mean that it has lost its soul; Peace in the Park features music, campaigning, environmental and peaceful messaging, stalls and great food. It suits the Ponderosa perfectly, with the layout of the park enabling organisers to divide up the festival’s offerings.

However, as a grassroots and community-run event, Peace in the Park requires ongoing fundraising to take place, and this is not always easy to achieve. In 2013, the festival could not take place due to a funding shortfall and, despite enthusiastic fundraising efforts to get Peace in the Park back up and running post-Covid, the same has happened this year.

It is with a heavy heart that we have to announce that, despite the – genuinely moving – response we have had over the last few weeks, we just do not have the funds in place to be able to confidently go ahead with Peace in the Park 2022, and are therefore postponing.

In an ordinary year, Peace in the Park is funded partly as a result of applications to charitable organizations and partly through a series of events which raise money throughout the year. We all know these have not been ordinary years, and we have not been able to have the quantity or size of events that we would have had in order to raise sufficient funds.

We said a month ago that we needed to raise £5,000 to take us to the minimum viable balance of £10,000 that we needed to have in place by 1st April. In that time we had a Dub Shack event, which raised £1,200, and we also received [£1744] in donations from individuals across the city. Unfortunately, there was a miscalculation (or a miscommunication) following the fundraiser. The money collected from tickets sold on the door by card was counted twice, once by the fundraising team, and once by the steering group as it had already reached the bank, unbeknownst to the fundraising team. This led us to believe we only had £1,200 to raise, when actually this figure was closer to £1,600. And this is the position we are currently in.

We would like to thank each and everyone of you, not only for your donations, but for every share, every comment of support for this festival of peace, unity and love. It moved us all as it shows just how much the festival is loved in this city.

Special thanks to the following people who really helped our effort over the last weeks (and in some cases months) and to some major funding organisations: Sarah Marshall @ Sheffield Star, Lucy Howard @ Sheffield Wire, Howie Pressman @ BBC Radio Sheffield, Peter Gilbert @ the Green Party, Sidney & Matilda, South Yorkshire Community Foundation, JG Graves Charitable Trust, and some of the lovely folk who have arranged events for us: Henry White and Spencer Edwins.

The donations
It would be fair to ask “what are you going to do with the donations you have received?” These donations will all go directly towards putting on Peace in the Park 2023 (more info on that below). There are some minor administration costs throughout the year, but the vast majority (90%+) of the money we have raised through this year’s fundraising events and the mammoth efforts of the last few weeks will all be the springboard from which we will bring you…

PITP 2023
It is not all doom and gloom. Although the last few weeks have been quite trying and upsetting, we have really found ourselves as a team, and we are all more than excited to begin the Peace in the Park 2023 campaign, and we’re keen to let you know that we are more than just a festival. We care about the community of Sheffield and we want to bring the joy of that glorious day dancing on the Ponderosa and spread it across Sheffield throughout the year.

We are planning more events, and more ways to involve more people, to spread the messages of Love and Peace. Keep your eyes peeled for further information.

2023 marks 20 years since Peace in the Park started in Devonshire Green as a protest against the Iraq war. We hope to do something really special to mark the occasion, and as we all dry our eyes, we are starting to get excited about bringing you something wonderful.

Refunds
We are aware that times are tight, and you may have donated for the festival this year but not be around next year. If you would like a refund, we will obviously have to ask for proof of the donation, but once that is given we will happily reimburse you. In this case please get in touch with us on the email address here: contact@peaceinthepark.org.uk. We do hope, though, that you will be able to let us put your donation towards next year and that you will be joining us then!

Remember
– Continue to be kind
– Support local business
– Love your pets & share pics of them looking cute 🐶
– Stay safe
From us all, Peace ☮️✌️ x